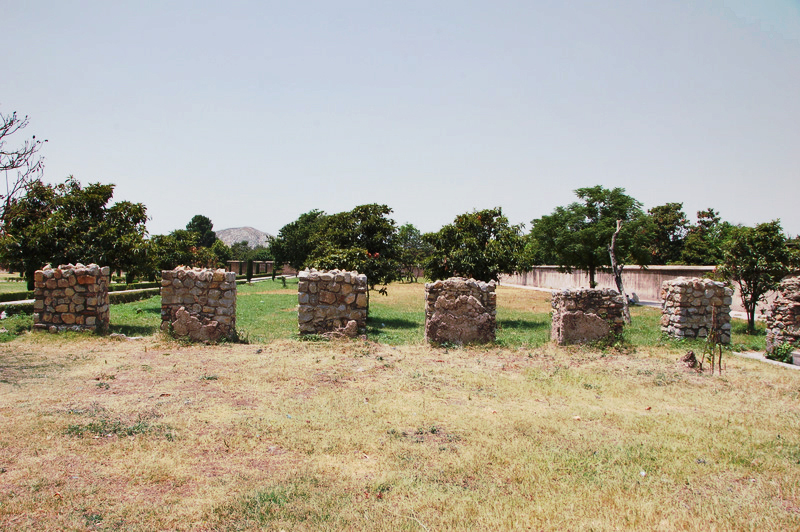 Not only the Wah garden rather the Mughals and gardens are linked with each other. When they came to rulein this area, wherever the stopped, refreshed or stayed, gardens were their first choice and they ordered beautiful lush green landscapes developed with breath taking garden buildings that still charm the viewers. If we talk about garden then The amazing shalamar garden at Lahore, kallar kahar Garden and many more around buildings and tombs still remain and fascinate the tourists, though in changeable shades of care and upkeep. There is yet another a beautiful garden, worthy of praise and visit, which is generally forgotten and left out while talking of Mughal gardens – the Wah Gardens.

This place is situated some 2km from Hasanabdal and near taxila as well. It is also said that on April 29 1607,the great emperor Akbar was passing through this place and saw the lush green cool place and he was amazed to see and unintentionally said “wah”or in English it’s “wao”so he liked the place so much and decided to build a proper garden and residence.There is a pond  as well in which he enjoyed Fishing. The gardens have two terraces, the upper and the lower one. These gardens were initially used as a transit camp by Mughal emperors – but owing to the natural beauty, the area was developed and cultivated by the successive emperors into gardens. The garden now contains all the features of a traditional Mughal garden. It is well-known for its gorgeous ponds, reflecting pools, water channels, waterfalls and fountains built during the reign of Shah Jahan.

After 1976, the government took over the gardens for archaeological study. Recently, the Department of Archaeology has done some work and restored part of the garden, while scholars have documented its history. The Department of Archaeology says that the department officials made a remarkable discovery of an unexcavated garden besides platform of main water tank. The new discovery includes original floor of main platform, measuring 14 x 12 feet, and other steps of the same structure. According to archaeologists, this discovery is very significant and will help assess the actual layout of the main water tank and its boundaries. A coin bearing image of Emperor George of India, dated 1917, was also found during landscaping. The original drainage system linking to the main water tank of the Gardens was also exposed. At the depth of 1 feet, extraordinary original fresh water drain linked through the wall plus walkway of main tank wall were exposed. In the same trench, southern corner was excavated up to 3-and-a-half feet, exposing an arched water channel. The drain was decorated internally with red sand stones. 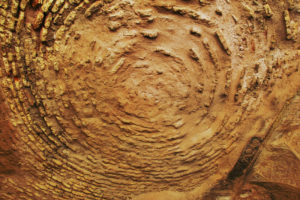 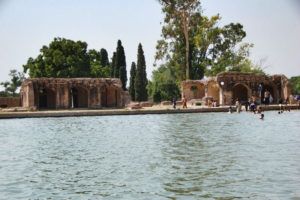