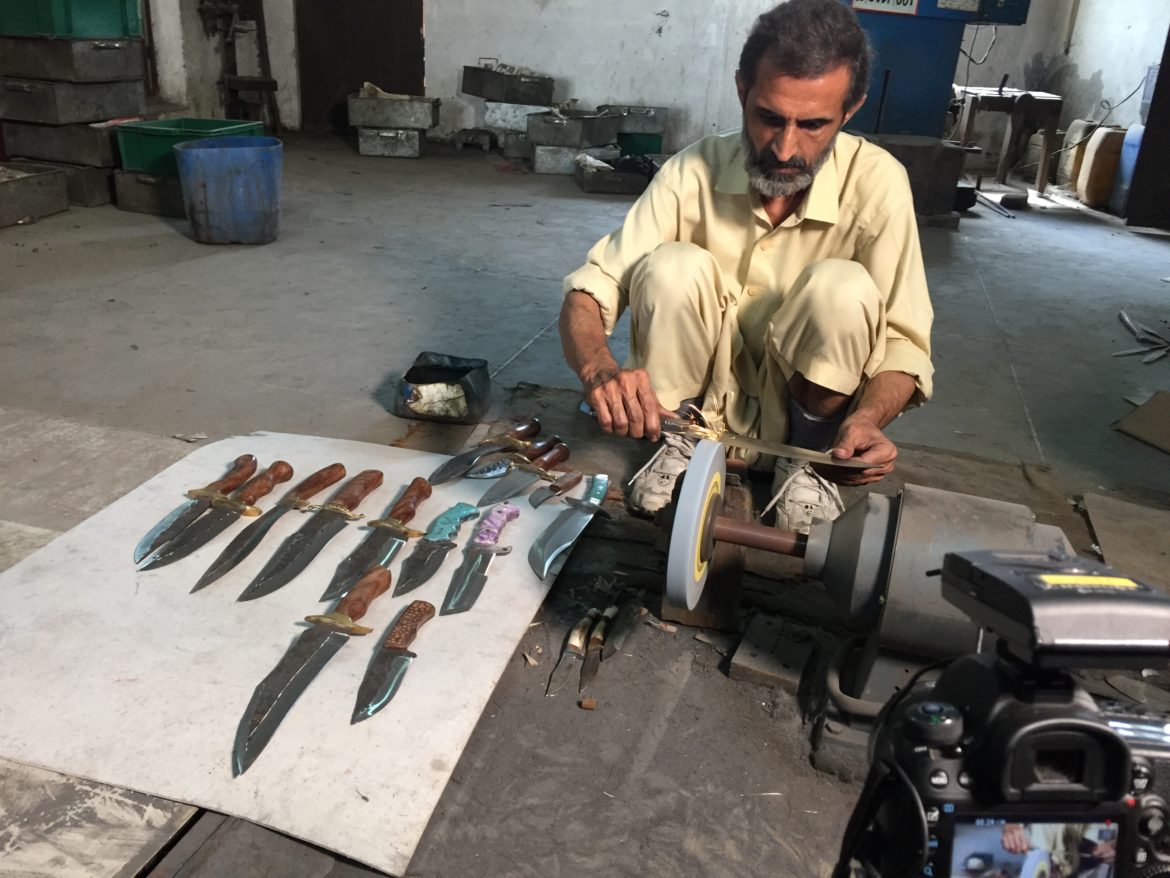 The Legendary travel writer of Pakistan Mr. Salman Rashid wrote beautiful pieces for Pakistan petroleum few years ago. The title of that diary was “A Chorus of Craft” in this beautiful collection he traveled all over the country, from the remote areas of Baluchistan to the corner of Gilgit Baltistan and documented few unique and rare craft of Pakistan.one of those article was about  the knife and sword making in Wazirabad.

After reading his articles, I wished to cover it too as documentary. It was Salman sahab’s affection that connected me to the owner of that factory where these beautiful crafts were being made. His name is Mr Khalid Mahmood Chaddah. The smart, tall man   with impressive personality. It was his greatness  the he allowed me visit each and every corner of his factory for 2 days.it took two days for my recordings and finally my recordings were completed. I was all alone for this work so it was my solo project.so I was visiting wazirabad very first time.

Pakistan’s city of Wazirabad holds a unique spot all around the world for its cutlery. Owed to their hard work and ability, the skilled workers of this region craft masterpieces which have no parallel.

Shah Jahan posted Wazir Khan as a governor and since then the city began to establish its name in the pages of history. Despite the cutlery, another interesting and historical skill found in this city. which separates it from other cities. is the industry of daggers and swordsmanship.

Wazirabad’s history of knives and daggers dates back to the era of Alexander the Great. Whilst fighting Porus, when he reached river Jehlum the wooden handles of his sword broke. They needed repairs. Alexander sent his sword to have it repaired and this is how this industry began. A dagger consists of three parts. The blade, the handle and its cover. For a dagger to reach its final pristine form it goes through several procedures.

Firstly, the sample of the dagger is drawn on a cardboard and cut out accordingly. in order to ease the procedure in the future. It does not matter if the picture is four inches or even ten inches. In case the customer shows us the picture and demands a four. We cut it out on the cardboard and show it to them.

In consistent with the picture they The steel sheet is cut off into smaller pieces. In consistent with the shape of the dagger with the help of a dying machine or hands. By doing so, the size and design of the dagger stands out. This work of metallurgy being done there, which covers the daggers, knives and these amazing swords. they are being used in Hollywood films; these swords which are known as fantasy swords. These are all being made in Wazirabad and Pakistan is a place wherein you will find novel handicrafts every ten miles.

Pakistan is a place wherein you will find novel handicrafts every ten miles. Damascus steel is the most renowned and daggers made out of it are considered the best in the world.

The dagger crafted out of the Damascus steel is comprised of a thousand layers, which are repeatedly compressed and heated under an extremely high This process is called forging Consequently, it helps to reveal the texture on the dagger. Owed to their layered sturdy structure and magnificent looks these daggers has no parallel whatsoever.

Despite this, the traditional Damascus steel was also introduced, which was invented by Muslims, there are a thousand layers compressed together. This is a natural material, also known as mysterious steel.

Because we are not sure how the layers will appear. After cutting the dagger it is straightened out with the hammer so as to remove the bend. This process is called tempering. By taking advantage of its durability, In order to place the handle at the end the holes are drilled in the beginning.

To strengthen the steel further it is heated under intense pressure until it completely turns red. Later, it is removed from the furnace and hammered. This hot and burning dagger is then placed in the [drum] of oil. Thereby enabling the steel to reach its maximum potential and toughness.

After tempering, the dagger is rubbed with a machine. in order to make its surface soft and smooth. To prepare the blade it is sharpen with extreme caution and proficiently on another machine. This makes the blade appear more prominent. To give it a wholesome and majestic look, the handle of the dagger plays an important role.

Astonishing to note, that aside from the plastic and wood. the horns of antelopes and stags are also used to craft its handle. Mr Chaddah showed me a dagger which has camel bone’s handle,. All of that was  handy work, on camel bone. He further told me that since we have it as a natural material we engrave them and export them to American or European markets.

After the handle is finalized, the dagger is then furnished with the help of various other tools. And thus the dagger reaches the final stages of its formation. Afterwards, in order to further refine the blade. it is sharpened once again. So as to help make the edges more visible and keen. Later, to give it shine and make it appears more beautiful. It is again polished twice or thrice with the help of the machine. In this manner the blade and the handle is furnished to make it look more compelling. 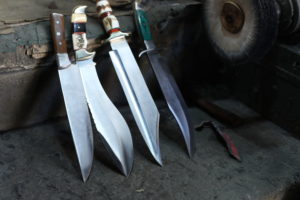 To ensure the polish and shine of the dagger remains intact. it is polished once again with the help of lime and kerosene oil. Henceforth, this dagger reaches the pinnacle of its perfection Mr Chaddah showed me few replica swords of Hollywood. When these swords became very famous and  it was  extremely heavy. It weighs around seven to eight kilograms .another sword which became famous Because of the release of Braveheart. So basically, Since, it was used in the movie, many individuals wanted to decorate their homes.

With this Before packing the the cover is designed The finest leather is used for the case It is cut manually and then sewn with the help of a machine. In the end, it is finally polished Later on, the dagger is packed in the most exquisite manner Thus, this is how the skilled laborers of with utmost dedication and hard work make the most beautiful and symbolic daggers thereby making this country renowned and famous.