It’s often said that SWAT is Pakistan’s Switzerland or this land is also called the heaven on earth. There are many outstanding tourist destinations at swat. When you just start exploring the the beautiful land, you start feeling yourself on another planet.but today I will not discuss the lovely landscapes of swat valley rather about one of the well-known remain over there.its about a stupa.when you say “stupa” the the religion “Budism”in mind.as well all know the followers of Gotham Buddha are mostly found in the neighborhood of Pakistan like japan,Bhutan ,maldeep  etc so the signs of this religion can also be found in Pakistan as well there was a time when they were present in this area as well now there would be hardly someone in Pakistan.

Stupas are holy constructions are for all Buddhists.in swat valley these stupas were also  built.today I will try to give some info regarding a great stupa called “Amluk Dara”.if you are going towards swat valley, mostly Mingora is the main city of swat and buses etc. drop you there.just before Mingora a sub division of swat comes that’s called “Bari kot”its about 20 km from Mingora. barikot is a beautiful small city, have some good places to visit. If you want to travel through Daewoo bus service then you can easily get there.

Protected by the great Mount Elam, the Amluk-Dara stupa is an early artifact,two kilometers from the main road which travels from Barikot to Buner and stands with ancient majesty and can be seen from the neighboring mountains.

Sculptures or remains of the sculptural decoration of the stupas, interesting architecture , including a small pyramid-roofed shrine built just in the middle of the main stupa’s stair – stucco decorations, potsherds and painted Shahi pottery dating back to the 7th-11th century were discovered during the excavation.On the eastern and northern side of the main stupa, the shells of the monastery, stupas and various remains can still be seen. They are mostly disturbed by the illegal diggers. Stein recorded a number of coins from the Kushanas to the Turki Shahis dating from the 2nd to 7th century A.D. 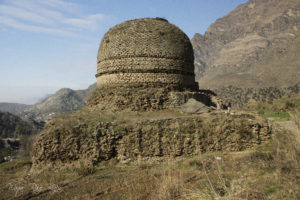 The site was explored by Barger and Wright in 1938. They recovered some Gandahara sculptures but did not investigate further to ascertain the exact period of the site.The stupa of Amlokdara is exposed to the treasure chasers have badly damaged the Stupa.The concern department should notice it, if they disregard the damages the stupa has received so for, the coming generation will not see this magnificent monument of splendid past. The time is appropriate to excavate the site at Amluk-dara stupa in order to protect the monuments and the hidden ancient times from the secret activities of unlawful diggers.